In 2018 we and several partners in the Flemish and the Walloon potato sector signed the agreement for robust organic potatoes. The goal is to use 100% robust cultivars in the organic potato chain by 2021.

A Belgian agreement for robust organic potatoes: why?

In 2006 organic cultivators were startled by an extremely fierce potato plague, which caused the harvest to fail. In order to avoid crop failures of this size in the future, several partners joined forces. All of them are looking for solutions and for organic cultivars that are resistant to the potato plague. This ensures that our organic farmers have more certainty and a stable income in the future. 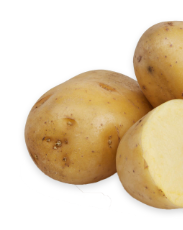 All of the partners who signed the agreement give priority to robust cultivars: both in the production of seeds as well as in the cultivation to the supermarket. It concerns cultivars that are resistant or very tolerant against phytopthora infestans (the potato plague). De aardappelhoeve contributes to this as well. Today we already work with 85 per cent robust cultivars. Our aim is the complete 100% by 2021.

Your browser is out-of-date!

Update your browser to view this website correctly. Update my browser now